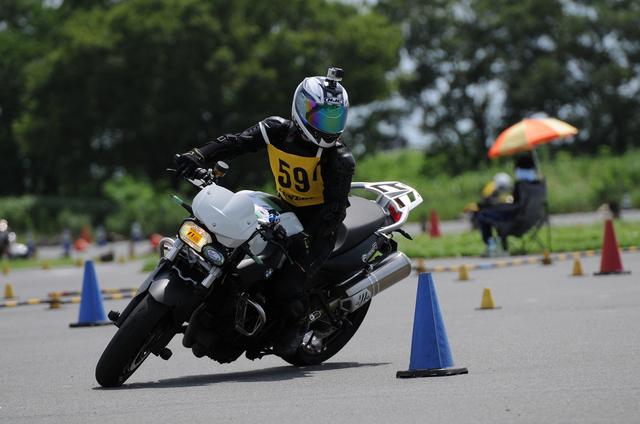 Tominaga NSR’s first victory this season upon his return to AUTOBY Cup Gymkhana Round3 ※English ver.

“Dunlop AUTOBY Cup Gymkhana” Round 3 took place on the 20th of July,and the entire six classes which totaled 185 machines have gathered in TEC-R in Kawashima-machi in Saitama prefecture.

Although it fortunately didn’t rain on the day, the weather was typical of the final days of the rainy season where the strong sun kept on peeping through the clouds at times which continued to raise the temperature of the hot humid air, and there was also a chance of getting a sudden thunder storm.

In addition, the setting of the course was a long course with no resting spots where the sections continued on from one after the other which resulted in creating very tough conditions for both the riders and the bikes. Regardless of that, the race to attack time kicked off with the Class 2 First Heat exerting all of the energy they had.

In Class A which is the fastest class, the Defending Champion, rider Tominaga, riding a NSR250R who has not won this season marked his very first victory with a time of 1 minute 43.657 seconds which was one second apart from the second place despite receiving a penalty of an additional one second in the second Heat.

He also tied at the top with the rider Yoshino with points ranking.

A more detailed report of the Motorbike Cup Gymkhana Round 3 is scheduled to be published in the September issue of the monthly published Autoby.
Please confirm the detailed results of Round 3 and further information regarding the gymkhana event in various locations in the home page of JAGE (Two wheel gymkhana sponsor groups).